1932... A milestone in Jewish sports history. The vision of a world-wide sporting event becomes a reality. A total of 350 courageous athletes traveled to Palestine for the first Maccabiah Games. Twelve Americans journeyed across the ocean to represent the United States in this landmark athletic event.
1985...Another milestone in Jewish Sports history. Participation has grown to over 4,000 athletes who represented 4-0 Nations. What commonly known as "Jewish Olympics" has become the pinnacle of amateur athletic competition among Jews, who gather in Israel every 4 years from the far reaches of the World.
I was so proud to be a Rhythmic Gymnastics Coach to represent the US at the 12th Maccabiah Games!
On July 8th we all got together at the Rutgers University campus, located in New Jersey for a 3 day preparation camp "Pre-camp". This was the initial gathering of the entire US 12th Maccabiah Games contingent, over 1,000 people. It was so fascinating to meet athletes from all over of the United States in all the different sports. It provided the opportunity for athletes to meet their teammates and coaches prior to departure. It was imperative to disseminate information about the procedures, schedules and events in Israel. We had lectures, we were shown movies, given literature about Israel and the Games, evening entertainment, uniform alteration and of course information on safety.
On July 10th, a 10-bus caravan rolled out of the Rutgers campus for JFK Airport. The surge of energy radiating from each member of the US delegation was unmeasurable!
The ten hour flight to Israel passed swiftly with the buzzing of conversation,card games, walkmans, naps, and even hot bagels. At last the sign flashed "fasten your seat belts"... We were landing in Israel! Clad in red, white and blue Adidas warm-ups, the American delegation promenaded down the gateway to the cheers of the Israeli media. Once through the customs and luggage collection, we all boarded buses to different  accommodation centers. We stayed at the Wingate Institute, not too far from Tel Aviv.
Our accommodations were very much military style. Small beds, tiny bedside table and few chairs. But everything was very clean and orderly. We woke up at 7am for breakfast at the big cafeteria: hard boiled eggs, bread, tomatoes and cucumbers. Training at 8am. Free time until 3pm.Training again at 4pm. Dinners were wonderful: delicious food, loud and  happy people, singing and dancing afterwards. We did have military protection at all times. Soldiers with rifles on the roofs, in the hallways, on the buses. It was so strange at first, but after few days it was part of our lives.
The opening ceremony, July 15, 1985 was a celebration of pomp and pageantry that will be everlasting in my memory. Ramat Gan Stadium overflowed with 55,000 zealous spectators and over 4,000 Jewish participants from 40 Nations. All were united by a love of sport and a common heritage. Barriers of language, culture, age melted under the stadium lights. Mark Spitz, 2-time Maccabiah participant was the first non-Israeli to light up the torch symbolizing the commencement of the Games.

Our competition was held in the Sports Center in Tel Aviv. Girls did an outstanding job, taking Gold medals All Around and in individual events. 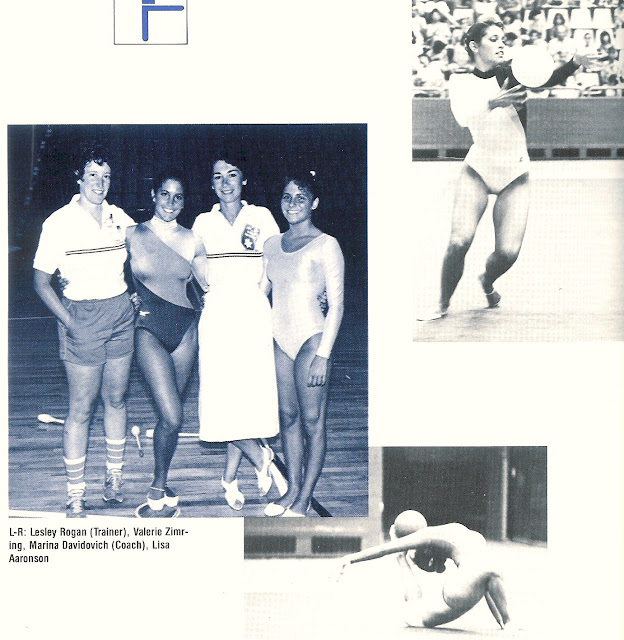 I will treasure every moment of these 2 weeks for the rest of my life!

Posted by Marina Davidovich at 5:57 PM